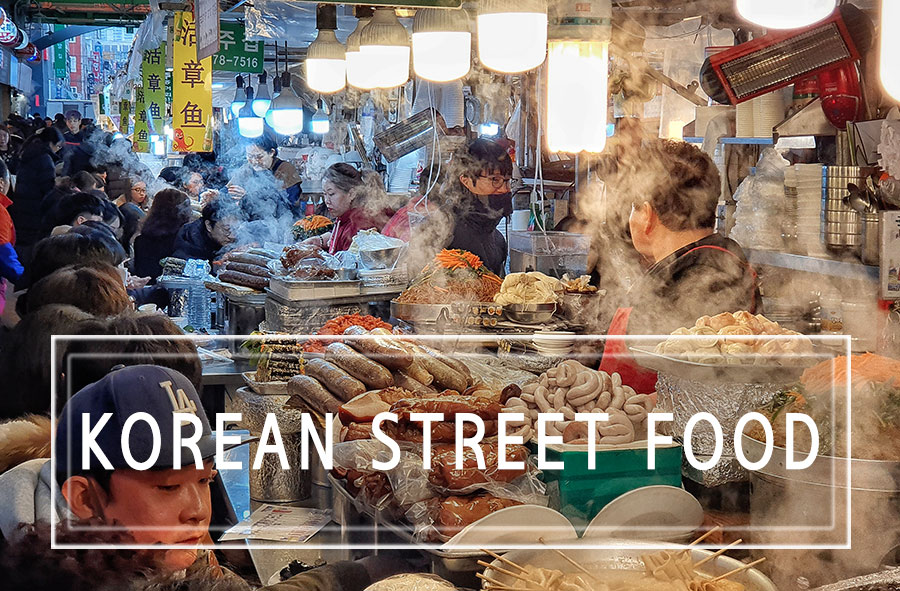 Street food in South Korea, as in many other countries of the lively Asian continent, is a fundamental part of the local culture, appreciated and, as you can see immediately upon arrival in the country, sold in many areas of the various cities. Food is a perfect social aggregator, especially when accompanied by a few good glasses of beer or some local alcohol such as Soju (소주) or Makgeolli (막걸리).

Where you can eat street food in South Korea

Street food in South Korea is usually sold in street side stalls, called Pojangmacha 포장 마차 , a sort of camping tent traditionally with a bright orange color, in which, usually, you are standing to eat the snack, but some are equipped with seats in front of the counter or even tables.

Another place where you can find Korean specialties is in one of the traditional markets around the various cities. Some of my favorites: the touristy but fascinating Gwangjang Market , the increasingly famous Tongin Market in the nice area of ​​Seocheon close to the Gyeongbokgung Palace and the Mangwon Market.

The extreme shopping area of  Myeong-dong  is also another place where you will find lot of Korean street food.

The more modern food trucks represent another possibility where you can taste the local delights!

Street food in South Korea is quite varied, from sweet to savory foods, both hot and cold and some specialties are really bizarre, such as the  Beondegi 번데기 , a soup of silkworms pupae. 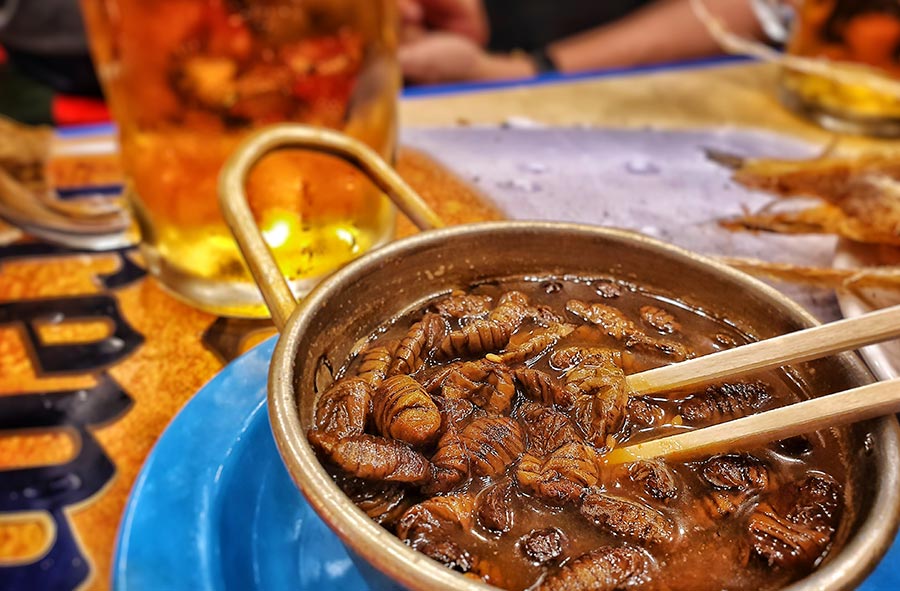 In addition to these particularities, the remaining choice is much more suited to the culinary habits of foreign visitors.

In random order I present you some of the most popular and traditional street food in South Korea that you can try to taste. The only advice I can give you is that if the dominant color of the food is red it means that it is spicy, with various gradations, so ask before eating! 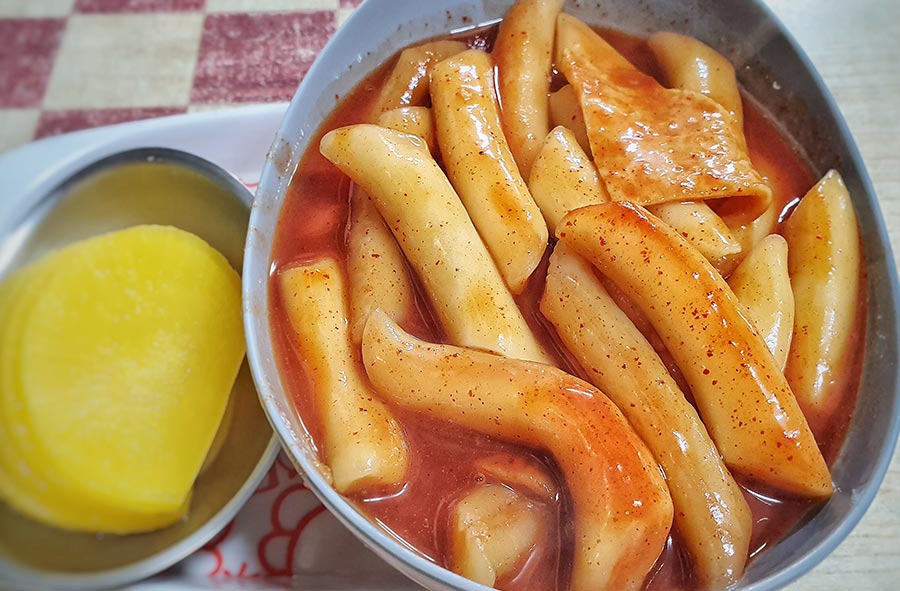 Again there are many variations based on the recipes of the various restaurants. Remember that the red sauce in which the tteok of Tteokbokki 떡볶이 is soaked and cooked is not tomato sauce and is usually spicy! But in tourist areas they probably just use a less spicy version by putting less gochugaru in the recipe.

It is often eaten with danmuji 단무지, a pickled radish yellow. 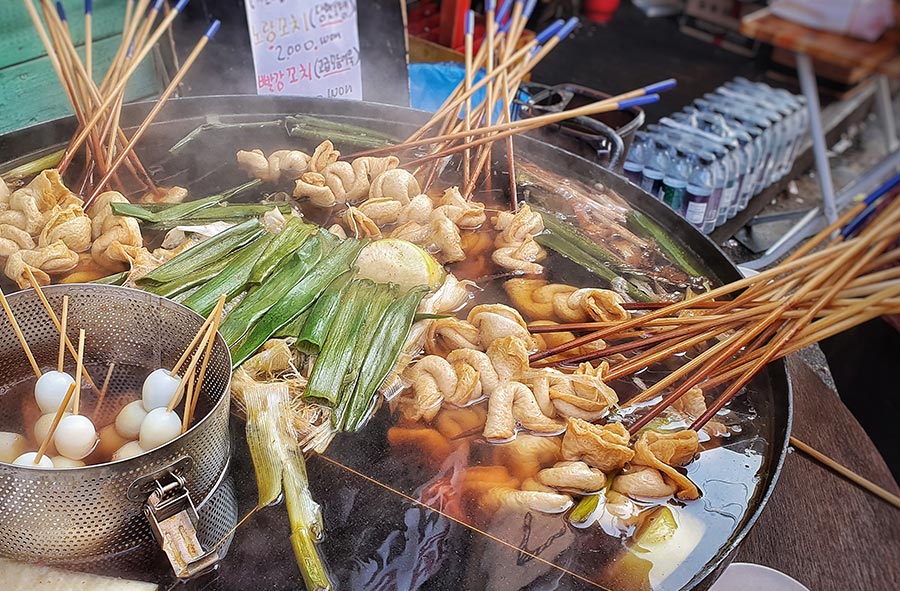 The eomuk 어묵 or also known by the Japanese name Odeng 오뎅 is a dish based on fish paste, in all shapes and sizes, even if it is usually flat and rectangular , sinuously put on a skewer and boiled in a tasty delicious broth, which is excellent to drink.

Originally from Japan, it is now served everywhere and is also very popular here in South Korea. 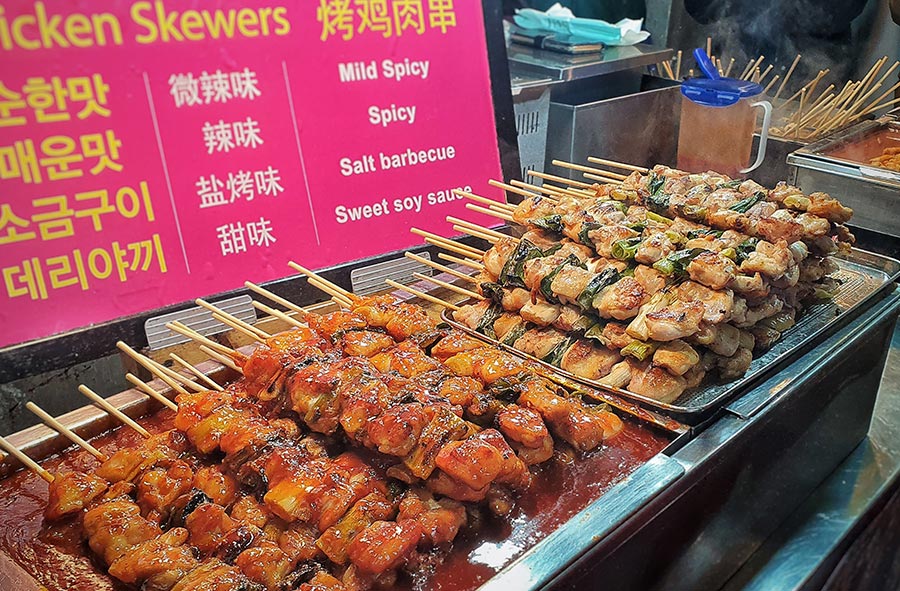 The kkochi 꼬치 are skewers of tasty morsels of meat alternated with strips of shallot, roasted on the grill. Usually chicken is used ( Dak-kkochi 닭 꼬치 ), but sausages, eomuk (fish paste), sundae (blood sausage), tteok (rice paste), fruits are also placed on the spit of sea…

They are then brushed with various delicious sauces, be careful that if it is red it can be spicy!

Versions also with glazed fruit, such as strawberries or grapes, are also famous, probably more for tourists than for locals. 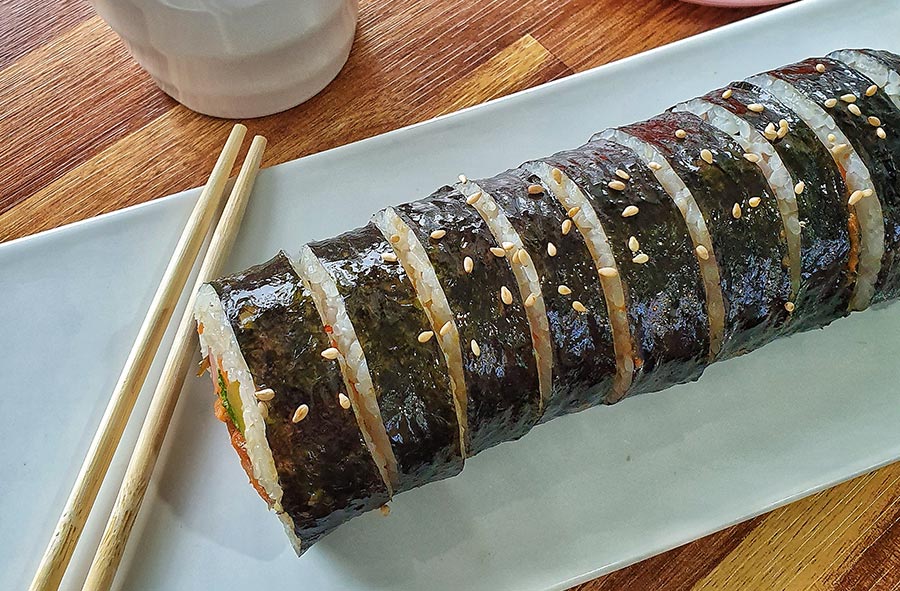 The Gimbap 김밥 is composed of rice (밥 Bap) to which various colorful ingredients are added, all rolled up and held together in a dried seaweed leaf (김 Gim / Kim). Sliced ​​and served in cuts with a circular section of a couple of centimeters each.

The taste varies according to the ingredients incorporated in rice and seaweed: carrots, cucumbers and omelette are usually cut into strips to which fish eggs, cheese, ham, tuna, meat are added at will … there are vegetarian gimbap, vegan gimbap … gimbap for all tastes!

Often the Gimbap 김밥  that is sold in traditional markets or in Pojangmacha (포장 마차) stalls is in the smaller variant called Goma Gimbap 꼬마 김밥 , the only difference compared to the same food in the larger version is that it is not cut into slices , but eaten whole. 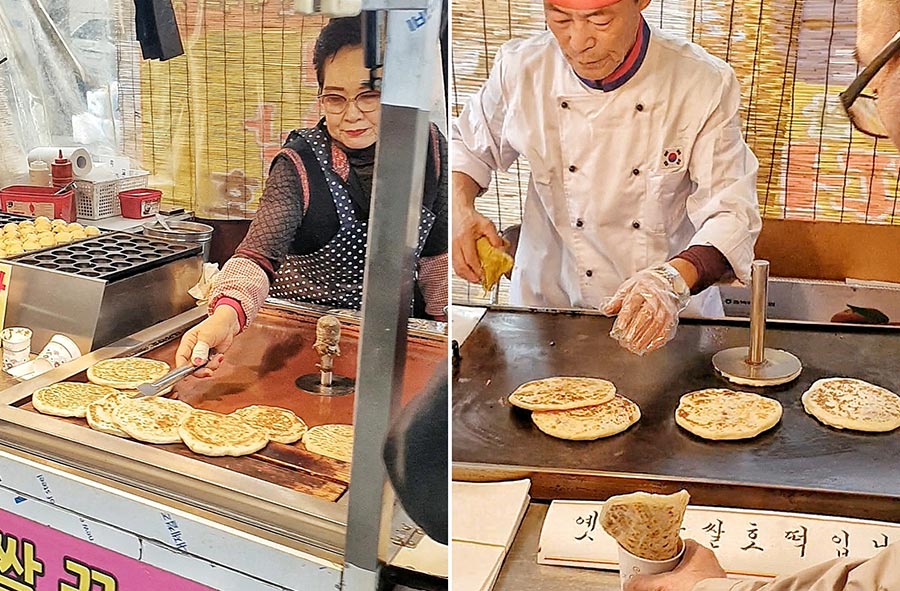 Hotteok 호떡 is a sweet pancake, made with flour, water, yeast and sugar cooked on an oiled hot plate. Cinnamon is often found as a filling, but there may be honey, crumbled peanuts or brown sugar.

A specialty imported from China at the beginning of the twentieth century and one of the most popular among the many street food in South Korea, it is usually eaten in winter. 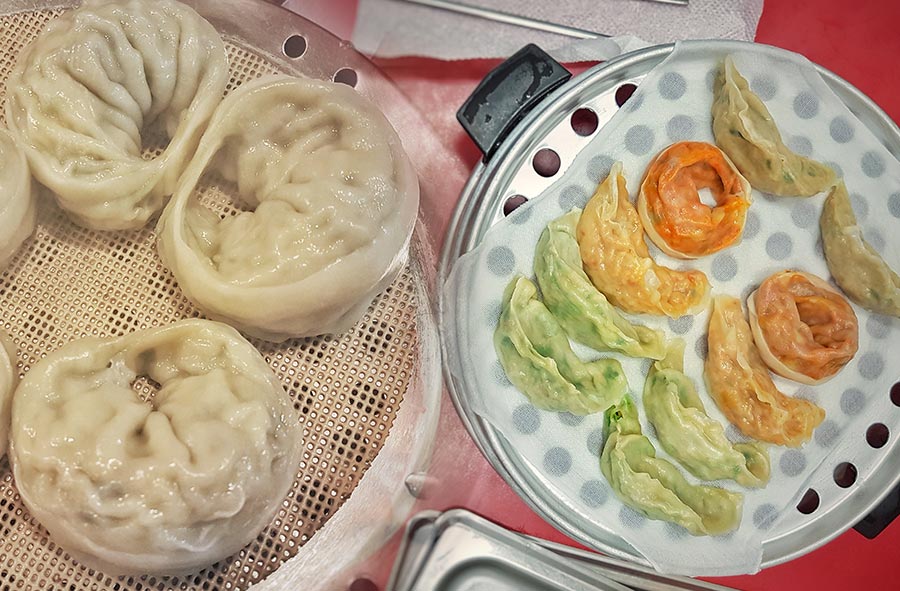 Mandu 만두 are Korean dumplings, with different variations based on the filling and the way they are cooked.

They are usually stuffed with meat and vegetables, only vegetables, transparent noodles, shrimp or kimchi . They can be steamed, boiled, fried and grilled. Even the shapes can vary, from a half moon. 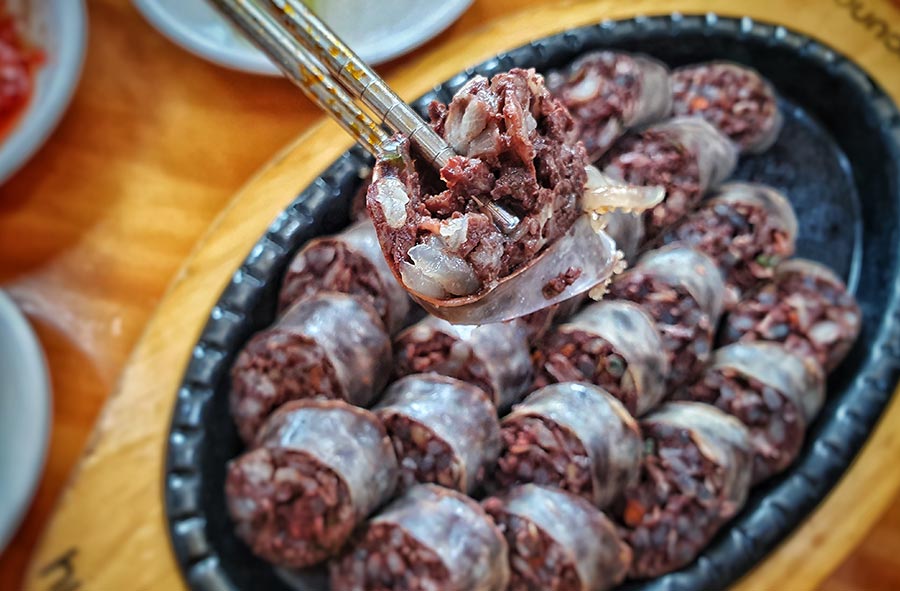 The Sundae 순대 is one of the most popular street food specialties of South (and North) Korea, ready to be eaten at stalls or in various restaurants. It is a blood sausage super appreciated by the local population.

Typical Korean food is usually made by filling the pig or bovine intestine with dangmyeon 당면 (transparent noodles), offal and pig blood. All then steamed or boiled in a pot giving the Sundae 순대 a solid consistency similar to that of a salami.

There are many varieties based on the region where is made, with different ingredients. 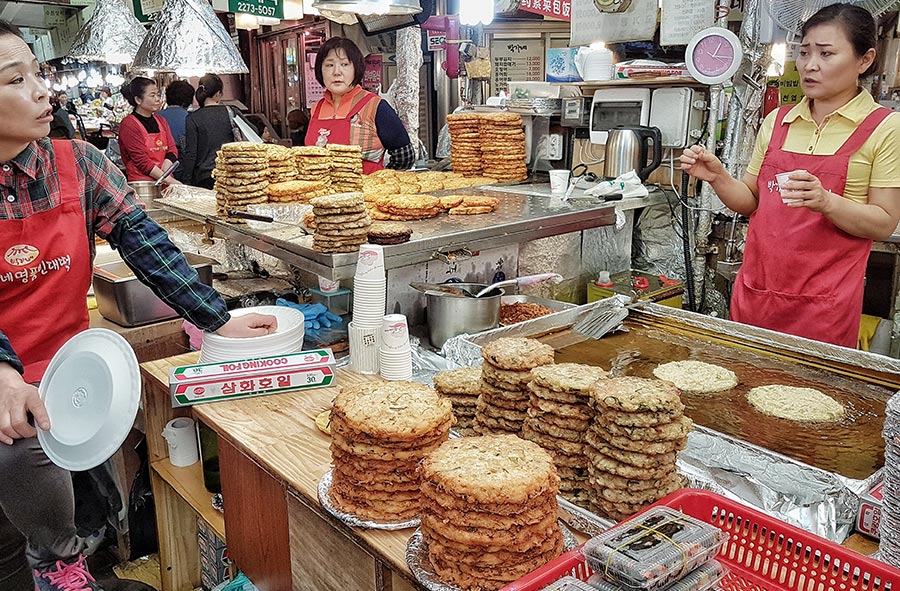 Another street food specialty in South Korea is the Bindae-tteok 빈대떡 , a yellow and thick crispy pancake.

There are many variations of fried food in the country, which this time is made of green bean sprouts (or mung bean) stuffed with vegetables, wild fern, pork, bean sprouts and kimchi. All cooked on an abundantly oiled hot plate and served ready to eat as it is. To be enjoyed soaking the Bindae-tteok 빈대떡 in a soy sauce. 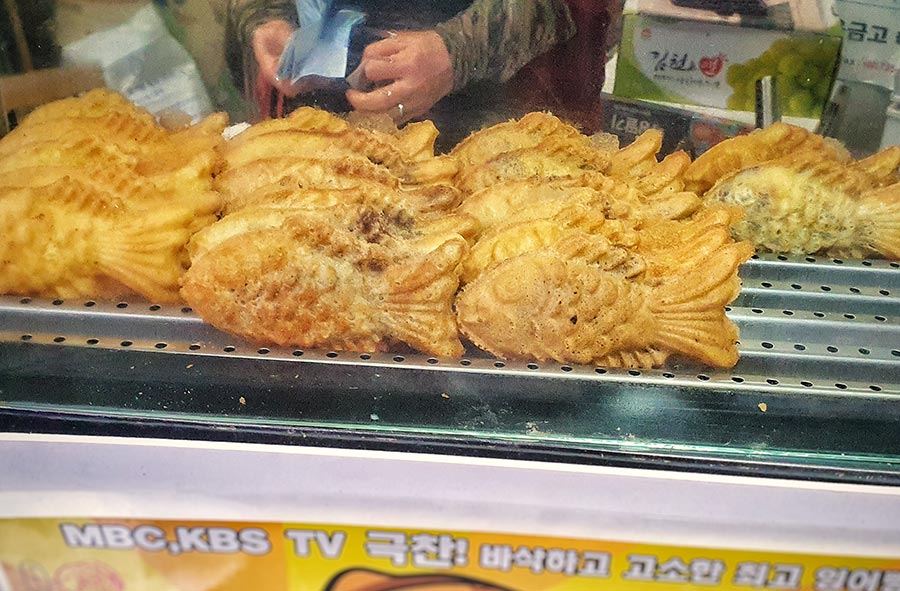 Bungeo-ppang 붕어빵 is a fish-shaped dessert, filled with a sweetened red bean paste.

The snack dough is poured together with the sweet mixture into a fish-shaped mold, which resembles the hot plate for making waffles, once cooked it is a crunchy delight that is usually eaten in winter.

The Bungeo-ppang 붕어빵 can also be stuffed with cream, chocolate and other various ingredients according to the seller’s personal recipe. 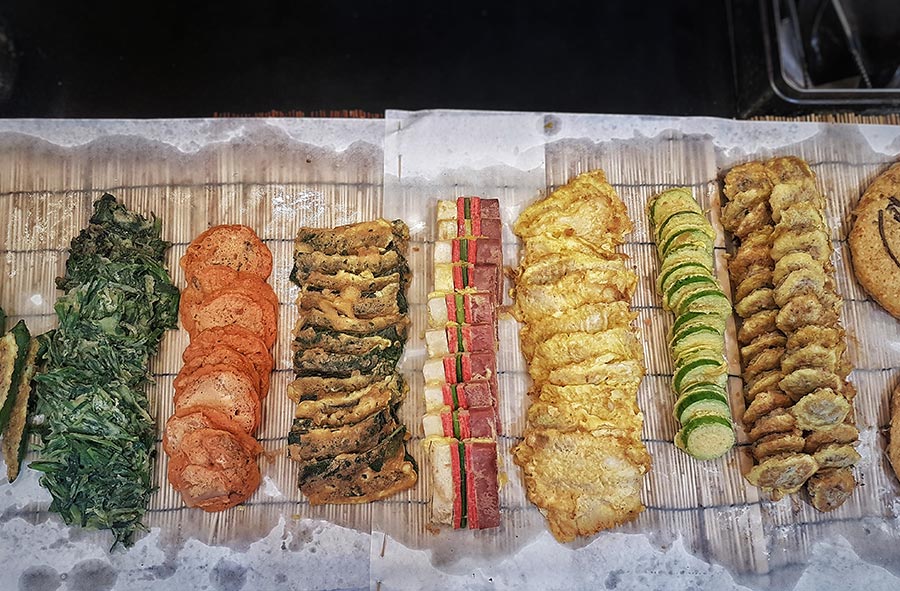 Jeon 전 is a pancake, easy to find almost everywhere and delicious to taste in all its variations, a dish of traditional Korean cuisine based on meat, fish, seafood or vegetables immersed in a dough of wheat flour and eggs which is then fried in a pan.

Jeon 전 should be eaten by chopping it with the chopsticks and dipped in some sauce, usually soy based one, but if you prefer you can dip your bite directly into the ketchup. 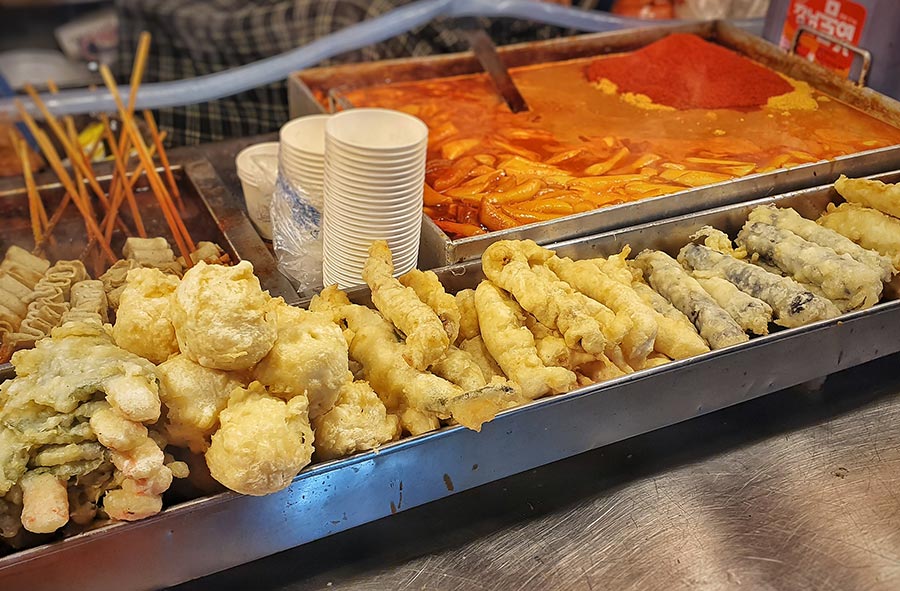 Twigim 튀김 is the Japanese  tempura in Korean style. Another fundamental element of street food in South Korea, always present in every Pojangmacha 포장 마차, is a crispy and delicious fry snacks with vegetables, squid, shrimp, sweet potatoes, eggs and Gimmari 김말이 which is a roll of glass noodles and dried seaweed.

You can taste it by dipping it in soy sauce, vinegar, shallots and chilli peppers sauce that you will always find in every stall or restaurant serving the specialty.

How to eat street food in South Korea

Street food in South Korea is usually eaten by tasting more than one specialty at a time, perhaps sharing food with a few friends. So when you are in a Pojangmacha 포장 마차 you can order more than one of the foods you see displayed on the counter, they are quite cheap!

A good pairing that you can try is Tteokbokki 떡볶이 and Odeng 오뎅 . Maybe accompanied by some Twigim 튀김 . But in reality everything works well combined, so you can try your personal menu! 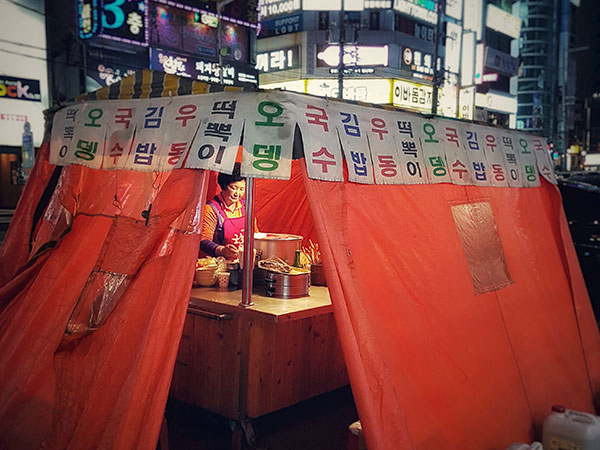 They are usually eaten at stalls as they represent a fairly quick meal. You can ask for a glass of broth in which Odeng 오뎅 is cooked and kept warm, especially during a cold winter, it is really excellent to drink.

You find soy sauces in which you can soak what you are eating, especially suitable for fried food.

What I have listed above are just some of the street foods you can find in the country, the variety is almost infinite, especially considering that new recipes and ideas that end up being part of street food in South Korea are always added to the traditional foods , introduced in the various stalls, sold mainly in the most tourist areas, so you can find yourself in front of something completely new and that you definitely have to try!